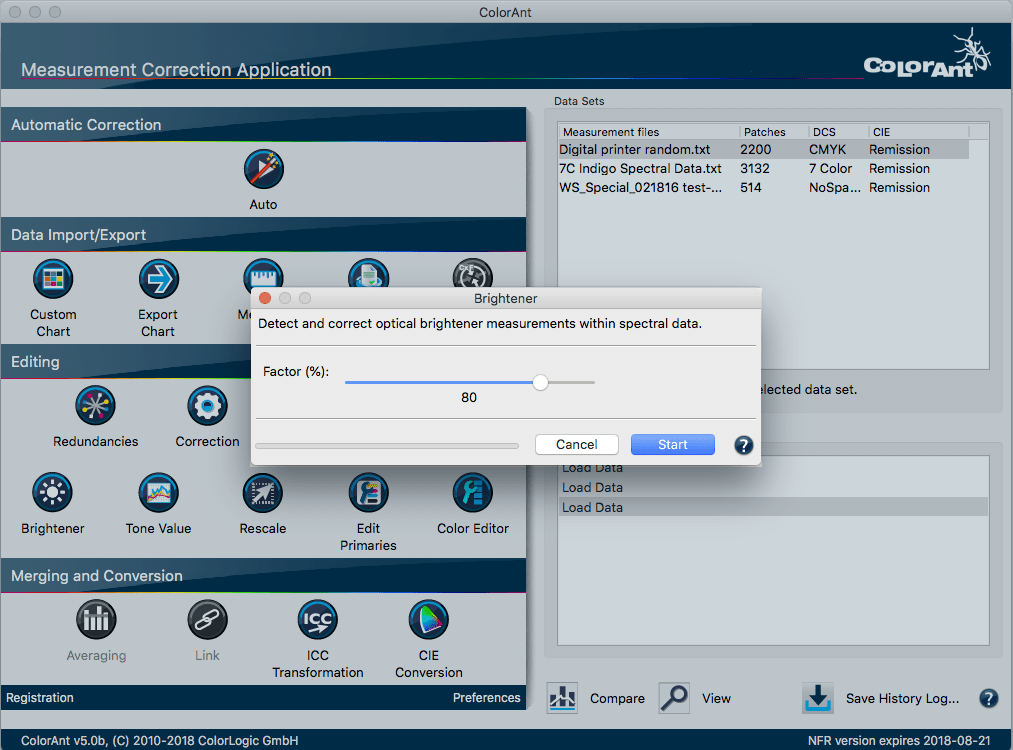 Paper manufacturers often use optical brighteners to make the paper look brighter. Unfortunately, visual validations will take place under different lighting conditions in comparison to the measuring device. Under standard D50 lighting conditions, the paper appears brighter and measured values usually appear a very bluish white without actually being brighter. The problem is validation under standard lighting booths, which deliver a questionable match with the D50 illuminant.

Spectrophotometric measurements with the D50 illuminant lead to issues when using the profile, in particular with validation under standard lighting, because the excessively blue proportion of the paperwhite is compensated in order to achieve a neutral gray. This can be problematic and lead to an overly yellowish gray balance or paper simulation during proofing.

Note: Due to the introduction of the ISO standard for improved D50 simulation in standardized lightning booths (ISO 3664:2009) and the M1 measuring condition (ISO 13655:2009), the effects are less dramatic as in the past. The effect of optical brighteners is now simulated much better in standardized lightning booths and fits more to the results of the measurement devices. Nevertheless, there can still be significant visual differences.

To remove this effect, the Brightener tool can be applied to measurement data. Spectral measurement data (remission data) is required for best results. The first step of optical brightener correction is the analysis of the remission curve of the paperwhite to determine whether the paper contains optical brighteners or is merely a blue-colored paper. The second step is correction, which only takes place if an optical brightener has been detected. The correction can be adjusted via a slider control and at a 100% setting, a similar result will be achieved as if the paper were measured with a UV cut filter.

Using the Brightener tool results in modification of the spectral values of the paper white. It is then incorporated into all areas of the measured value file(s) that are affected by the optical brightener. As a result, the lighter color values will predominantly be affected whereas the shadows and the highly saturated colors will either less or not at all affected. If the measurement file is available with spectral remission values ColorAnt will preserve the spectral data.

Note: For optimal results apply the Brightener tool on spectral measurement data (remission values). Correction of the Lab values will work as well with non-spectral measured values, but a more basic compensation model will be used.